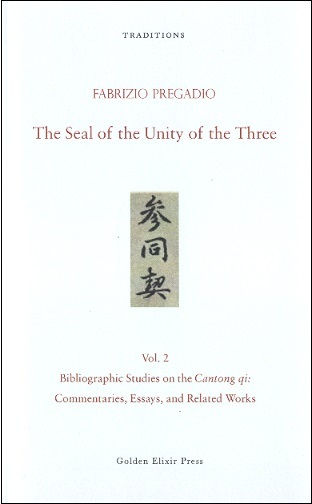 The Seal of the Unity of the Three, Vol. 2: Bibliographic Studies on the Cantong Qi-Commentaries,

The Cantong qi is the main text of Taoist Internal Alchemy (Neidan). In addition to Taoist masters and adepts, it has also attracted the attention of philosophers, cosmologists, poets, literati, calligraphers, philologists, and bibliophiles. No less than 38 commentaries written through the end of the 19th century are extant, and dozens of texts found in the Taoist Canon and elsewhere are related to it. The present book is the most complete guide available in any language to this vast literature.

The book is divided into two main parts. Part 1 contains a catalogue of extant and lost commentaries, essays, and related texts, listing altogether about 150 works with details on their authors, editions, and reprints. Part 2 contains a survey of the textual tradition of the Cantong qi, focused on the composition and contents of about 40 major texts. A final index of authors, editors, titles, and editions facilitates the use of the book.