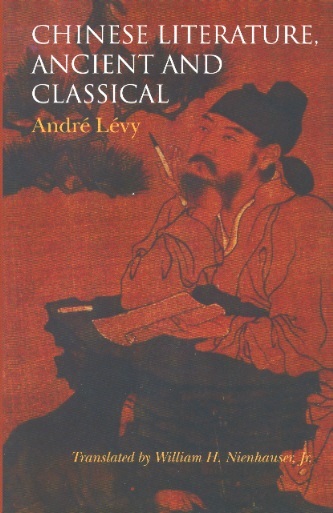 Andre Levy sets out in this slim volume to provide a picture of Chinese literature of the past. He does so not in lengthy dissertations on literature, but by blending the colors of approximately 120 vivid translations with his personal insights on these works, and then framing these readings in innovative historical accounts. The result is a brilliant illustration of the four basic literary groups of traditional China: the classics, poetry, prose, and the literature of entertainment. Although Levy relates literary evolution to parallels in political and social history, he is less dependent on the political chronology of dynasties than were previous histories of Chinese literature. His generic approach, moreover, provides a greater insight into how these literary types developed and why they became the foundations of Chinese literature.

In the first chapter, Levy sees the classics as a response to troubled times and argues for modern parallels. His treatment of prose as the second of these literary types reflects both Chinese taste and historical fact. Aware that Chinese critics have long argued their literature was essentially lyric, Levy offers 50 translations of various verse genres and reveals how they supplanted one another in popularity. The emphasis he accords the major genres of entertainment literature, drama, and the novel is a refreshing acknowledgment of the importance of these forms over the past seven or eight centuries. This emphasis also serves to illustrate the breadth of Chinese literature, tracing the origins of the novel, for example, to its semi-oral predecessors, or exploring the popular origins of various lyric forms. Levy provides an ideal introduction to thethree millennia of traditional Chinese literature.