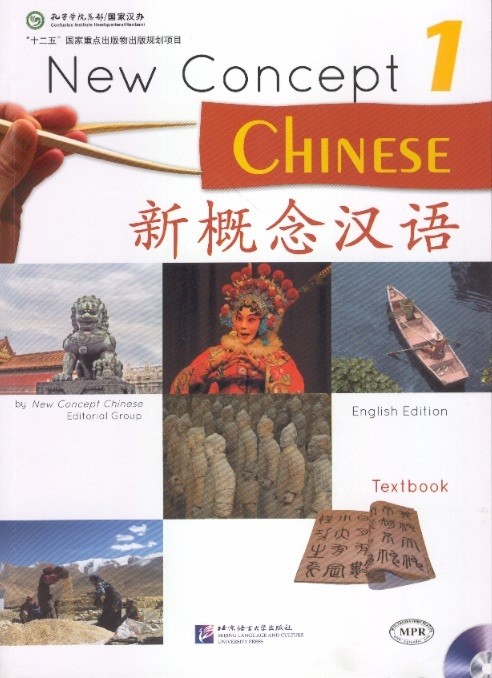 New Concept Chinese, a series of Chinese textbooks for adults, is suitable for both self-teaching and classroom teaching. Observing the principle of “making Chinese easier to learn”, this series presents practical, concise and interesting teaching materials and employs easy, flexible and effective teaching methods so that students and teachers could learn and teach Chinese in a convenient and effective way.
The whole series includes Textbooks, Workbooks, Chinese Character Workbooks and Teacher’s Books.
This is Textbook 1 in the series, targeted at adults who have some preliminary Chinese knowledge. It teaches more than 400 words frequently used in verbal communication, over 300 Chinese characters and over 40 common sentence patterns as well as the topics foreigners are most likely to encounter in their study, life and work, such as 'Professions', 'Hobbies', 'Food' and 'Means of Transport'. Upon finishing the first volume, students can achieve a Chinese proficiency of New HSK Level 2.
The design of New Concept Chinese follows three principles, namely “practical”, “easy” and “scientific”.
1. Practical
(1) Common situations: The situations selected are common in everyday life, such as ordering food, shopping, asking the way and making an invitation.
(2) Frequently used expressions: The expressions selected are frequently used in everyday life, such as those used to make an introduction, a phone call or an apology, to thank someone and to talk about the weather.
(3) Communicative activities: There is a communicative activity in the review lesson in each unit to train the students’ ability to put into practice what they have learned.
2. Easy
(1) Interesting content: The texts, being fun and humorous, displays the charm of Chinese language, characters and culture step by step.
(2) Short texts: The texts are short ones, each of which can be finished within one hour, making students feel a continuing sense of achievement constantly.
(3) Humorous cartoons: Each text is illustrated by a series of cartoons, making it much more fun to learn Chinese.
3. Scientific
(1) Well-arranged layout: The new words, grammar points and Chinese characters are arranged in a scientific and reasonable way based on the regularity in learning Chinese.
(2) Step-by-step progression: Functional topics are presented progress from “greeting” to “shopping” and then to “seeing a doctor”, and Chinese characters from single-element ones to compound ones.
Repeated practice: There are altogether 20 units, each including a main lesson and a review one. The latter is a review of the key sentence patterns and words in the former, which will reappear and be reinforced repeatedly in later units too.