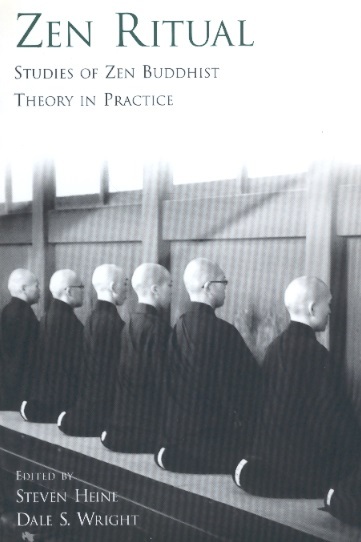 When books about Zen Buddhism began appearing in Western languages just over a half-century ago, there was no interest whatsoever in the role of ritual in Zen. Indeed, what attracted Western readers' interest was the Zen rejection of ritual. The famous 'Beat Zen' writers were delighted by
the Zen emphasis on spontaneity as opposed to planned, repetitious action, and wrote inspirationally about the demythologized, anti-ritualized spirit of Zen. Quotes from the great Zen masters supported this understanding of Zen, and led to the fervor that fueled the opening of Zen centers throughout the West.

Once Western practitioners in these centers began to practice Zen seriously, however, they discovered that zazen - Zen meditation - is a ritualized practice supported by centuries-old ritual practices of East Asia. Although initially in tension with the popular anti-ritual image of ancient Zen masters, interest in Zen ritual has increased along with awareness of its fundamental role in the spirit of Zen. Eventually, Zen practitioners would form the idea of no-mind, or the open and awakened state of mind in which ingrained habits of thinking give way to more receptive, direct forms of experience. This notion provides a perspective from which ritual could gain enormous respect as a vehicle to spiritual awakening, and thus this volume seeks to emphasize the significance of ritual in Zen practice.

Containing 9 articles by prominent scholars about a variety of topics, including Zen rituals kinhin and zazen, this volume covers rituals from the early Chan period to modern Japan. Each chapter covers key developments that occurred in the Linji/Rinzai and Caodon/ Soto schools of China and Japan, describing how Zen rituals mold the lives and characters of its practitioners, shaping them in accordance with the ideal of Zen awakening. This volume is a significant step towards placing these practices in a larger historical and analytical perspective.