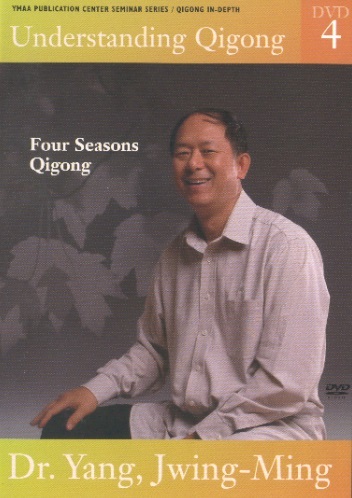 Four Seasons Qigong is a well-known traditional medical Qigong practice in which one learns how to regulate the body from one season to the next to avoid common illnesses. This Qigong specializes in training the five internal Yin organs; heart, lungs, liver, kidneys, and spleen, which correspond to the four seasons the year.

It is believed that when we get sick it is often due to the body’s difficulty in adapting to the changes from one season to another. For example, when Fall arrives, it is easier to catch a cold, and when Summer comes, the heart can be too excited. By practicing Four Seasons Qigong, you are able to adjust your body’s Qi during the change of seasons so your health can be maintained.

This multi-language program is captured in High Definition, and builds on the theory taught in DVDs 1, 2, and 3. Dr. Yang's systematic approach to teaching offers deep insight into the ancient art of Qigong with modern scientific data to support his theory from both an Eastern and Western perspective.