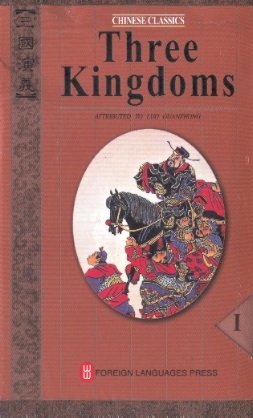 'The empire, long divided, must unite; long united, must divide. Thus is has ever been.' With this characterization of the inevitable cycle of Chinese history, the monumental tale Three Kingdoms begins. As important for Chinese culture as the Homeric epics have been for the West, this Ming dynasty masterpiece continues to be read and loved throughout China as well as in Japan, Korea, and Vietnam. The novel offers a startling and unsparing view of how power is wielded, how diplomacy is conducted, and how wars are planned and fought; it has influenced the ways that Chinese think about power, diplomacy, and war even to this day. ThreeKingdomsportrays a fateful moment at the end of the Hart dynasty(206 B.C.-A.D. 220) when the future of the Chinese empire lay in the balance.Writing more than a millennium later, Luo Guanzhong drew on ofen-told tales of this turbulent period to fashion a sophisticated, compelling narrative, whose characters display vivid individuality and epic grandeur. The story begins when the emperor, fearing uprisings by peasant rebels known as the Yellow Scarves sends an urgent appeal to the provinces for popular support.in response, three young men-the aristocratic [.in Xuande, the fugitive Lord Guan. and the pig-butcher Zhang Fei-meet to pledge eternal brotherhood and feal to their beleaguered government. From these events comes a chain of and consequence that leads ultimately to the collapse of the Han.