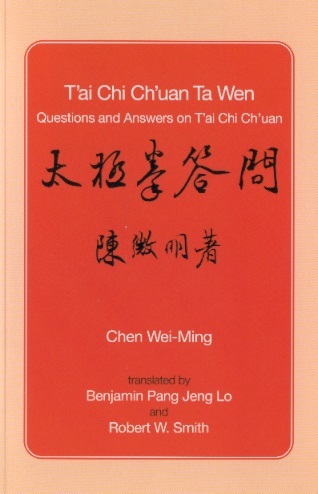 "This book, T'ai Chi Ch'uan Ta Wen, was written sixty years ago by Professor Ch'en Wei-ming, who was a famous exponent of the Yang style T'ai Chi Ch'uan and a student of the great master, Yang Cheng-fu. In 1927 he established the Chih Jou School in Shanghai where he taught many students. At that time he saw how popular T'ai Chi Ch'uan was becoming and he was concerned that if it became a fad it would lose its original spirit. In the process of its being spread, its principles would be forgotten or mixed with other forms, thus leading to the loss of an important part of its essence. Therefore, this book is based only on what Professor Ch'en heard in his teacher's classes. The questions are his own personal questions."