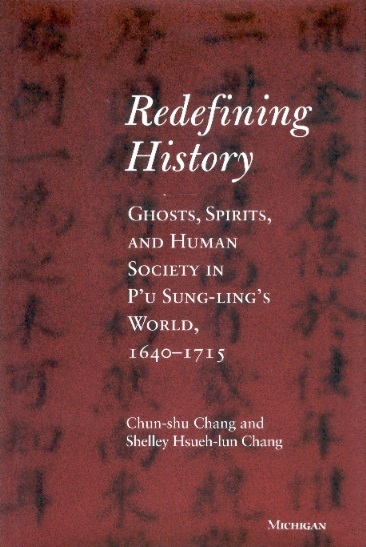 This fascinating new book by Chun-shu Chang and Shelley Hsueh-lun Chang follows the career, times, and ideas of P'u Sung-ling (1640-1715) and focuses its discussion on his magnum opus, Liao-chai chih- i, or Tales of the Unusual from the Studio of Deliberation and Musing. P'u lived through the turbulent period of Ming-Ch'ing dynastic transition in the seventeenth century and he aspired, as did millions of young men of his time, to pass the Imperial Civil Service Examinations necessary for securing a government position.
While P'u did not attain his goal of becoming a statesman, having failed exam after exam for fifty years, he was not impeded in his intellectual and literary pursuits. When he died in 1715, he left a body of work including over 500 essays, 1,295 poems, 119 lyrics, 18 encyclopedias and handbooks, 20 operas, 100 folk songs, and 500 short stories. He went on to become one of the most well-known scholar-writers and the best known short-story author in Chinese history. The 500 stories in Liao-chai chih-i, which P'u composed in his self-styled capacity as historian, had the most lasting influence of any single work on the shaping of popular consciousness in China.
Following the life and literature of one man, this study sets out to detail the history of the Ming-Ch'ing dynastic transition in the East Shantung region. It is based on an exhaustive exploration of contemporary Chinese historical and literary sources, including local histories, clan and family records, autobiographical and biographical materials, folklore, essays, poems, and plays: in short, the entire range of literary sources. Using a comprehensive historical approach, the authors cover a broad array of issues relevant to the topic at hand.
Redefining History is an important source for the study of Chinese history and literature and comparative historical studies. It will also appeal to people interested in the relation between history and literature, issues of gender and class, race relations, biographical studies, and popular culture movements.
Chun-shu Chang is Professor of History, University of Michigan, and Honorary Professor of Chinese History, China. Shelley Hsueh-lun Chang is Visiting Associate Professor of History and Research Associate, Center for Chinese Studies, University of Michigan.