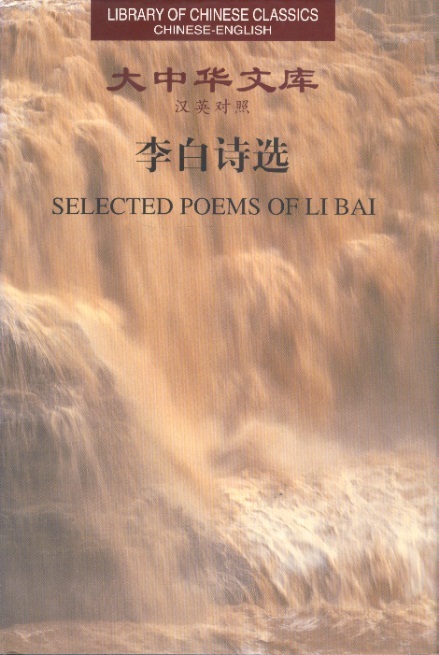 Li Bai (701-762) is regarded as the greatest romantic poet of the Tang Dynasty (618-907) and a representative of the high Tang culture, combination of realistic Northern culture represented by Confucian philosophy and the Book of Poetry, and romantic Southern culture represented by Taoist philosophy and the Elegies of the South. But he could neither fulfill his Confucian ideal to serve the country nor find spiritual freedom in Taoism, so he could only chant poetry and drink wine to drown his sorrow as describe by Du Fu in Eight Immortal Drinkers (Li Bai could turn sweet nectar into verses; Drunk in the capital, he'd lie in shops of wine). Here we see the tragedy of a genuine staying lonely on earth like an angel fallen from Heave. His poetry is marked by masculine grandeur in the Waterfall in Mount Lu Viewed from Afar (The sunlit Censer Peak exhales incense-like cloud; The cataract hangs like upended stream, sounding lout. Its torrent dashes down three thousand feet from high / As if the Silver River fell from azure sky), in which we see the mountain exhale cloud from down below and the Silver River, Chinese name for the Milky Way, fall from on high, and heaven and earth seem to merge into one, that is the Chinese way of communion with nature. In his poetry we can find his love of nature, of freedom, of the people, of his friends, in short, of truth, good and beauty.
Li Bai is best known for the extravagant imagination and striking Taoist imagery in his poetry, as well as for his great love for liquor. Like Du Fu, he spent much of his life travelling, although in his case it was because his wealth allowed him to, rather than because his poverty forced him. He is said to have drowned in the Yangtze River, having fallen from his boat while drunkenly trying to embrace the reflection of the moon. Approximately 1,100 of his poems remain today. Over 110 poems are selected and translated in this book.