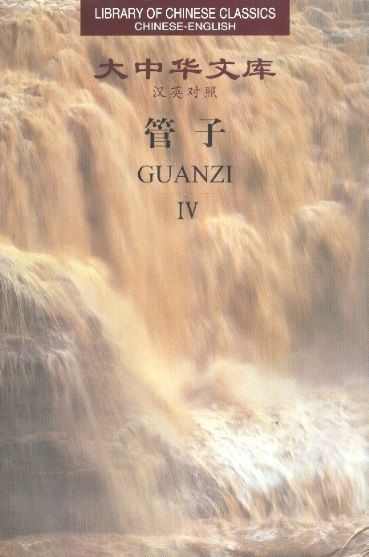 Guanzi is a collection which was written in Guan Zhong's name during the Warring States to the Qin Dynasty and the Han Dynasty periods, and also contains some of Guan Zhong's own thoughts. Liu Xiang edited these 564 writings written in the name of Guan Zhong, expunged the repetitive contents and selected 86 for file. After that, 10 of the selected texts were lost. At present there are 76 works in existence. All bibliographies have considered Guanzi to be the work of the Legalists of the State of Qi. Actually, this collection contains not only the thoughts of the Taoists, Confucians and ancient Chinese Thinkers specializing in the art of war, it also contains thoughts on Yin-Yang, the Five Main Elements, astronomy, the ancient calendar, education and agriculture. Moreover, the economic thoughts of Guanzi make this collection unique among all classical Chinese documents. The English version of this edition is the first complete translation of Guanzi. Names for the famous Chinese minister of state, Guan Zhong (d. 645 B.C.), the Guanzi is one of the largest collections of ancient Chinese writings still in existence. The Guanzi was compiled in its present form about 26 B.C. by the Han dynasty scholar Liu Xiang, and the surviving text consists of some 76 anonymous essays dating from the 5th century B.C. to the first century B.C.