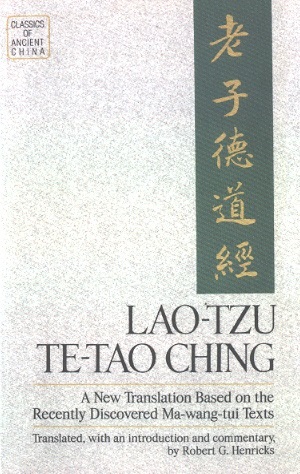 Lao-Tzu Te-Tao Ching: A new Translation Based on the Recently Discovered Ma-wang-tui Texts

Lao-tzu’s Te-Tao Ching has been treasured for thousands of years for its poetic statement of life’s most profound and elusive truths. Although the Te-Tao Ching is widely read, the author’s enigmatic style and the less than perfect condition of the Chinese originals make many of its brief poems difficult to understand. So readers of find literature hailed the discovery, in 1973, of two copies of the Te-Tao Ching which had been buried in 168 B.C.

These manuscripts are more than five centuries older than any others known, and they correct many defects of later versions: their grammar and vocabulary frequently make the classic easier to understand; lost lines are restored (as many as three in some poems); some sections follow a more logical sequence.

Such differences make it necessary to reevaluate traditional interpretations of the Te-Tao Ching, and Professor Henricks has done this in an extensive commentary to his excellent new translation. In addition, Professor Henricks has provided an introduction that explains the basics of Taoism and discusses the many other important finds from Ma-want-tui.