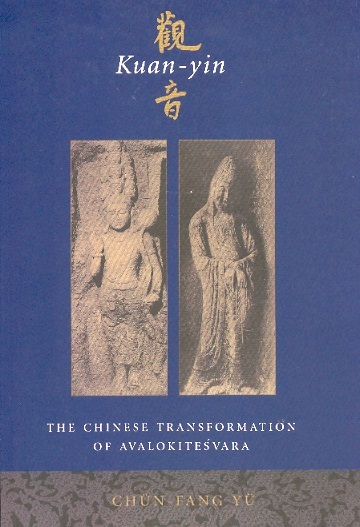 Kuan-Yin: The Chinese Transformation of Avalokitesvara

By far one of the most important objects of worship in the Buddhist traditions, the bodhisattva Avalokitesvara is regarded as the embodiment of compassion. He has been widely revered throughout the Buddhist countries of Asia since the early centuries of the Common Era. While he was closely identified with the royalty in South and Southeast Asia, and the Tibetans continue to this day to view the Dalai Lamas as his incarnations, in China he became a she―Kuan-yin, the "Goddess of Mercy"―and has a very different history. The causes and processes of this metamorphosis have perplexed Buddhist scholars for centuries.

In this groundbreaking, comprehensive study, Chün-fang Yü discusses this dramatic transformation of the (male) Indian bodhisattva Avalokitesvara into the (female) Chinese Kuan-yin―from a relatively minor figure in the Buddha's retinue to a universal savior and one of the most popular deities in Chinese religion.

Focusing on the various media through which the feminine Kuan-yin became constructed and domesticated in China, Yü thoroughly examines Buddhist scriptures, miracle stories, pilgrimages, popular literature, and monastic and local gazetteers―as well as the changing iconography reflected in Kuan-yin's images and artistic representations―to determine the role this material played in this amazing transformation. The book eloquently depicts the domestication of Kuan-yin as a case study of the indigenization of Buddhism in China and illuminates the ways this beloved deity has affected the lives of all Chinese people down the ages.