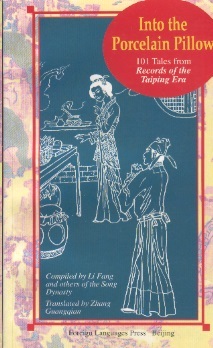 Records of the Taiping Era is China's most famous collection of ancient stories. It contains nearly 7,000 intriguing tales from 475 books dating from the Han Dynasty (206 B.C.- 220 A.D.) to the beginning of the Song Dynasty (978). The whole work consists of 500 Volumes in over 150 categories. The book was completed in the third year of the Taiping Xingguo period (978), hence the name.

The present work comprises 101 stories from Records of the Taiping Era compiled according to the categories of "Gods and Spirits" and "Man and Life." The stories of "Gods and Spirits" are full of wisdom, while those of "Man and Life" are endearing and exotic. Products of a liberal and romantic era in China's history. these exquisite and marvellous stories encapsulate the imagination and creativity of the ancient Chinese people. They have had a lasting impact on the Chinese people's ways of thinking concepts, folk customs and everyday life through the ages. The lavish illustrations of the plots of the stories will lead readers into a mysterious antique