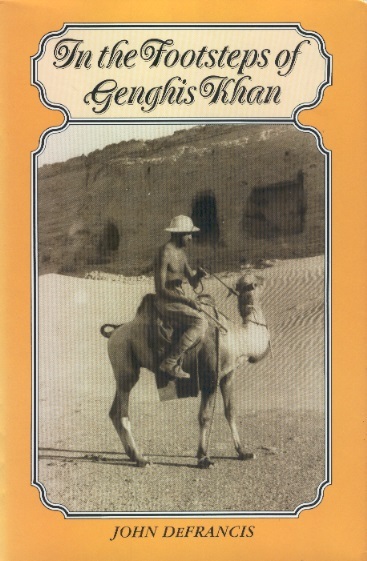 In the Foosteps of Genghis Khan

As a twenty-three-year-old student in mid-1930s, pre-World War II China, John DeFrancis did not set out to make a thousand-mile camel trek across the Gobi Desert, become the prisoner of a Muslim warlord, or travel twelve hundred miles down the bandit-infested Yellow River on an inflated sheepskin raft. But these were just some of the adventures experienced by the author and his traveling companion when they tried to retrace the footsteps of Genghis Khan and ended up dodging the fighting between the Communists nearing the end of their Long March and a coalition of forces under Chiang Kai-shek's Central Government and a cabal of Muslim warlords.
Informed by an extensive knowledge of Chinese history and punctuated with keen observation and gentle humor, the narrative is a personal history that can be read both as a tale of high adventure in the wild west of China and as prelude to the present in that tortured land.
Westerners can no longer trace the footsteps of Genghis Khan. Many areas of China that challenged the adventuresome were declared off-limits more than a half-century ago - and the Gobi Desert and sensitive border regions are still inaccessible.