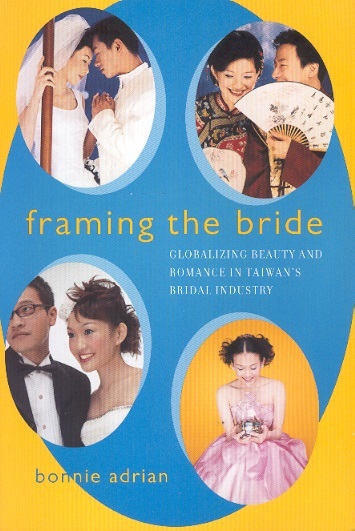 With a wedding impending, the Taiwanese bride-to-be turns to bridal photographers, makeup artists, and hair stylists to transform her image beyond recognition. They give her fairer skin, eyes like a Western baby doll, and gowns inspired by sources from Victorian England to MTV.

An absorbing consideration of contemporary bridal practices in Taiwan, Framing the Bride shows how the lavish photographs represent more than mere conspicuous consumption. They are artifacts infused with cultural meaning and emotional significance, products of the gender- and generation-based conflicts in Taiwan’s hybrid system of modern matrimony. From the bridal photographs, the book opens out into broader issues such as courtship, marriage, kinship, globalization, and the meaning of the "West" and "Western" cultural images of beauty.

Bonnie Adrian argues that in compiling enormous bridal albums full of photographs of brides and grooms in varieties of finery, posed in different places, and exuding romance, Taiwanese brides engage in a new rite of passage―one that challenges the terms of marriage set out in conventional wedding rites. In Framing the Bride, we see how this practice is also a creative response to U.S. domination of transnational visual imagery―how bridal photographers and their subjects take the project of globalization into their own hands, defining its terms for their lives even as they expose the emptiness of its images.