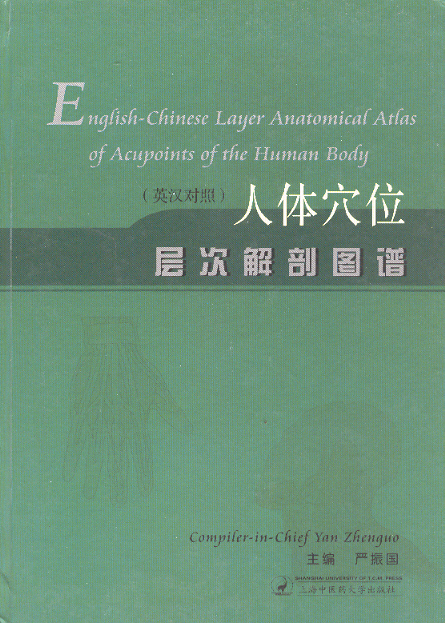 The book is composed of two parts. Part One contains a total of 56 color figures showing the layered anatomical acupoints of the human body, which means that figures are shown from the front, back and lateral side, respectively. Part Two contains detailed instructions on about 380 accupionts in terms of their name, accupoint number, location, localization, indications (symptoms) and needle method. There is also an appendix at the end of the book: Table of the Bone Proportional Measurement. The first three figures introduce the acupoints on the whole body, illustrating the fourteen meridians and the location of 361 meridian acupoints and 48 extraordinary acupoints (approved by WHO). The fourth one shows some special acupoints such as tongue and womb. The other figures include 12 pieces showing the anatomical figures of acupoints on the head and neck, 12 pieces on the torso or trunk, 12 pieces on the upper limbs, and 16 on the lower limbs. This atlas is complied in the combined form of the whole anatomy and regional anatomy. In each region, the anatomical structure in the different superficial, middle and deep layers are supposed to explain their relation with the meridian acupoints. The anatomy in the superficial layer and middle layer indicates the relation between the skin, the muscles and the distribution of the superficial nerves with the acupoints. The anatomy in the deep layer is drawn in three dimensions for indicating the relation between the structure layers of nerves, blood vessels, bones and visera with the acupoints.