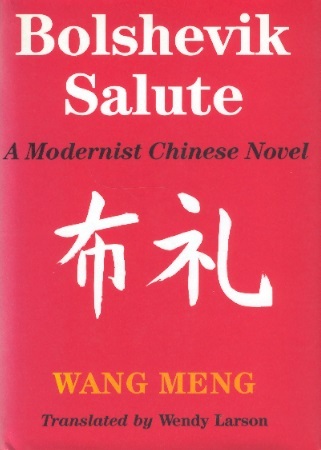 In September 1989 Wang Meng was catapulted into international headlines when the Chinese government, as part of its purge of liberal oficials following the crushing of the student-led democracy movement in Tiananmen Square, announcd his dismissal as Minister of Culture. Wang had long been a popular and respected, yet controversial writer, having published innovative fiction that depicted the psychological underside of political life in modern China.

Bolshevik Salute, the first example of a Chinese modernist novel to appear in English translation, tells the story of Zhong Yicheng, a young man committed to the Chinese Communist Party, and Ling Xue, the comrade whom he loves and eventually marries. Zhong is attacked when a children's poem he has written, "Litttle Winter Wheat Tells Its Tale," is found, to his bewilderment, to be a subversive political statement. Branded as a rightist, he loses his party membership and is exiled to manual labor in the country. Twenty-six scenes covering the years from Zhong's teenage enthusiasm in the forties to his readmission to the party in 1979 explore the mind of a man trapped between his own self-knowledge and love of the Communist Party and the definition of himself the party requires him to accept. As he struggles to define reality and justify his existence, Zhong's perspective ranges from idealistic zeal to cynical despair. This brilliant exploration of the psychology of political identity and alientation presents an inside view of the anguish eperienced by individuals in modern China trying to remain faithful to both themselves and the state.

When Bolshevik Salute was first published in China in 1979, it became a focal point of the debate on the literary forms that had begun to be used after the end of the Cultural Revolution. Writers who used such techniques as stream-of-consciousness narrative, reverse chronology, and psychological exploration were attacked on both cultural and political grounds. They were accused of elitism in writing for only a highly educated intellectual minority, and of decadence in using Western literary techniques developed during periods of imperialism and capitalist expansion. Defending their work, these writers maintained that the destruction of ideological unity and the resulting psychological uncertainty caused by the Cultural Revolution could not be adequately expressed using the socially engaged, mass-oriented realism favored by the government. Thus there arose native Chinese modernism.

Like the hero of Bolshevik Salute, Wang Meng joined the Communist Party as a teenager, and was denounced in the Anti-Rightist Campaign of 1957 because of a short story he had written which criticized Party cadres. He was assigned to manual work in the countryside and was briefly reprieved before being sent for sixteen years to remote Xinjiang Province. In 1979 he was allowed to return to Beijing, where he worked as a professional writer in the Chinese Writers' Association and began to publish stories and novellas. Wang's tenure as Minister of Culture from 1986 to 1989 was a time of liberalization, during which he voiced his attitude toward government control of the arts in his statement that "neither administrative measures nor propaganda are effective in defining what is true, good and beautiful.