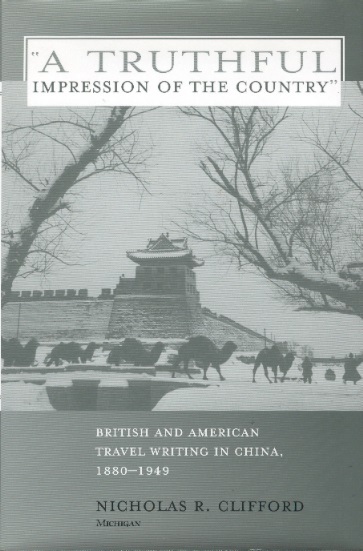 "A Truthful Impression of the Country"-British & American Travel Writing in China, 1880-1949

"A Truthful Impression of the Country" spans a period of roughly seven decades in China, from the late nineteenth century through the first half of the twentieth.
Nicholas R. Clifford argues that, for a variety of reasons, travel accounts during this time claimed a particular kind of veracity that distinguished them from the work of other writers--scholars, journalists, diplomats, policymakers, or memoir-writing expatriates--who also sought to represent an unfamiliar China to the West. Yet even as the genre claims to be a "truthful impression," it contains an implicit warning that the traveler's own sensibility enters into the account and into the representation of the unfamiliar and the exotic.
"A Truthful Impression of the Country" will appeal not only to those interested in the broad phenomenon of imperialism but also to those interested in cultural studies and post-colonialism. It will likewise prove accessible to the general reader exploring Sino-Western interactions or in travel writing as a particular genre.
Nicholas R. Clifford is College Professor Emeritus, Middlebury College. He is also the author of the novel The House of Memory and of the monographs Shanghai, 1925: Urban Nationalism and the Defense of Foreign Privilege and Spoilt Children of Empire: Westerners in Shanghai and the Chinese Revolution of 1925--1927.